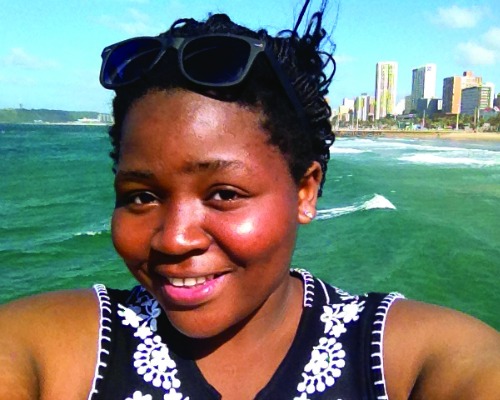 Many of our au pairs go on to complete great things after their program year ends. South African au pair Sinegugu Gasa, who returned home after successfully completing her program year in the U.S, decided she had to come back to the United States to for her higher education. She was recently profiled in her school's student publication, The Collegian. Read that story below:

Sinegugu Gasa, known as Sne on Lorain County Community College's campus, is a native of Durban. She came to the United States two-and-a-half years ago.

Known as eThekwini, meaning bay or lagoon in Zulu, Durban is located in the KwaZulu-Natal Province along the Indian ocean on South Africa's southeastern coast.

While the climate in her home country is significantly warmer than in Ohio, important factors in the average South African's lifestyle like post-secondary opportunities aren't as accessible and as high of a priority as they are in the U.S..

'Access to tertiary education in South Africa [isn't what it should be]|I mean, I asked myself '˜How am I going to go to college?',' she said. 'I knew it was something I had to do, but the resources just weren't there. And I didn't want to go to just any school, as well.'

Gasa said that while the government in her country is trying to help more young adults gain admittance to college, earning a degree is not a top priority for many in her homeland.

Initially, though, attending college was not something Gasa thought about. When she first came to the U.S., she registered for a job as an au pair in an attempt to find new experiences and see a different country.

'I wanted to work and get some money, and not be in [South Africa],' Gasa explained. 'I wanted to live somewhere else and see how they do things there. I just had that curiosity " I was like '˜South Africa is not big enough for me'; I needed to see something else besides my little hometown.'

The au pair program Gasa registered for had paired her with several different families, but she said she had a good feeling about her Ohio family.

'When I arrived, I was a live-in nanny and later managed to change my visa to a student visa with [their] help,' Gasa said.

Read more about Sinegugu's story in The Collegian