Sports Around the World! 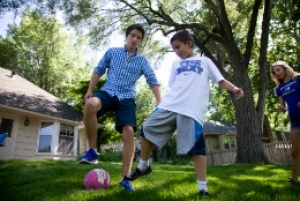 One of the greatest parts of the au pair program is learning about a new culture. Both host families and au pairs discover things about the world that they never knew before, from food to greeting customs and everything in-between. No matter what country you're from, it's likely that you have a sport that everyone loves. In this post, we look at some of the most popular sports around the world.

Football or Soccer (USA): Football is the world's most popular sport, with over 250 million players in more than 200 countries. The game consists of 2 teams of 11 players, who advance the ball purely by kicking and aim to score goals, worth 1 point each. There are both male and female leagues and a World Cup takes place every 4 years. In this tournament, 32 countries send their teams to compete to become world champions. The World Cup is the most popular televised sporting event, with over 3.2 billion television viewers- that's almost 1 of every 2 people on the planet!

Cricket: Cricket was created in England in the 16th century and spread throughout the world as the English Empire expanded. In cricket, 2 teams of 11 compete to hit a ball with a bat and score runs. A game of cricket is known as a match and is often played over 3-5 days for up to 8 hours per day. The longest cricket match ever was over 150 hours of play! Cricket is now most popular in Australia, England, India, and Southern Africa.

Tennis: Tennis is loved around the world, with people of all ages and cultures playing it. Tennis is played both individually or with a partner and consists of hitting a ball over a net with a racket. The teams hit the ball back and forth until one player misses the ball or hits it out of bounds, resulting in a point for the opposite person. Tennis is an Olympic game and also has 4 major annual tournaments: the Australian Open, the French Open, Wimbledon and the US Open. Tennis is well known in pop culture, with many popular players becoming household names.

American Football: American Football is sometimes called gridiron in other countries. It includes 2 teams of 11, working to advance the ball down the 120 yard field to score a touchdown (6 points) or a field goal (3 points). American Football originated from rugby and was first played in the 1800s. It is the most popular sport in the United States, with young children and families often playing it in the backyard. Every year, there is one Super Bowl where the 2 best teams in the USA compete. Companies pay millions of dollars to advertise during the Super Bowl, with the most expensive advertisement costing $4 million USD! Take this opportunity to talk about different sports with your host family or au pair! You may be surprised at what you learn.