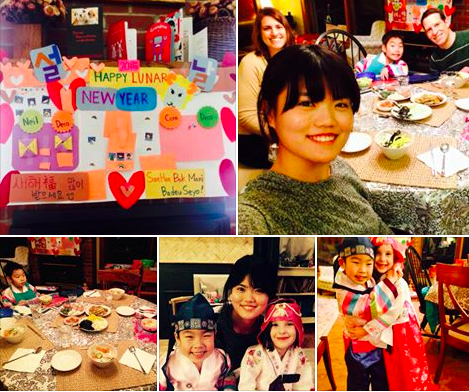 The interpersonal benefits associated with hosting an au pair are extensive. As an Area Director, I often see how connecting two different cultures strengthens the bonds between the families and the au pair. During my monthly contact calls I occasionally hear that a host family has invited their au pair to share in a family tradition or a holiday custom. This is a great way for the au pair to learn how everyone prepares, who participates and how it is celebrated.

I was reminded recently that the au pairs also enjoy sharing their customs and holidays with their host families. Two of our au pairs, Seungmi and Yujin, decided to celebrate their favorite holiday, Korean New Year, with their housemates. The day, also known as Lunar New Year, is one of the most significant traditional Korean holidays. It generally falls on the day of the second new moon after Winter solstice and the celebration lasts three days.

The au pairs taught their host children a variety of the holiday's customs. They demonstrated the Sebeh, the traditional bow, and then showed how it is different for boys and girls. The kids also learned a new Korean phrase, 'Haehae bok mani badeuseyo' which is a blessing for their elders meaning 'Please receive luck in the New Year'. The elders reward this gesture by giving their children money in a luck bag made of silk.

Seungmi and her host family shared the Seolnal dinner. She helped the kids dress in Hanbok, the traditional Korean costume, for the meal. Foods such as Tteokguk (a soup with sliced rice cakes), Wanja Jun (tofu and meat patties) and Korean desserts were served. The Tteokguk is the most important food of the New Year because, according to tradition, the Korean New Year is similar to a birthday for Koreans. Once you finish eating the Tteokguk you are considered one year older.

Yujin took an Early Childhood Education course at the University of Pittsburgh and put it to use planning fun and meaningful activities for the Korean New Year. In preparation for the holiday she helped her host family's children make a decorative banner. Yujin taught them Seolnal, a Lunar New Year song, in Korean. She also talked about the holiday's symbolic bird, the magpie or Kachi, and shared what her family and other relatives do to celebrate back in Korea. The children practiced how to bow, say the traditional words and listen to the words of wisdom from their parents. At the end of the celebration the kids received their pocket money.

Of course, the sharing of customs isn't limited just to holidays. Seungmi lives with the Belusko family and their three children. The main goal when the Belusko's chose AuPairCare was to expose their children to the Asian culture. Seungmi talks to the children each day about Korea and its history. She also discusses the differences between living in America and Korea.

The kids have learned how to count in Korean and new phrases like 'I love you'. Seungmi and the kids sing lots of Korean songs together because they all like to sing. The host family eats Korean food almost every day because they all enjoy many of the traditional dishes. They cook rice, Korean curry, seaweed, bulgogi, and rice cakes.

Yujin also shares the Korean culture with her host family, the Dwyers, and their two children. She has started teaching the kids Korean words and showing them how to prepare Korean food. The Dwyers have particularly appreciated the additional Korean influences in their house because their son is adopted from Korea.

It's nice to hear examples like this of au pairs who go out of their way to share their customs and traditions. Seungmi and Yujin invested time preparing for this special holiday and were rewarded with supportive host families who enjoyed celebrating with them. These two special au pairs and their host families are a perfect example of meaningful cultural exchange made possible by the au pair program.