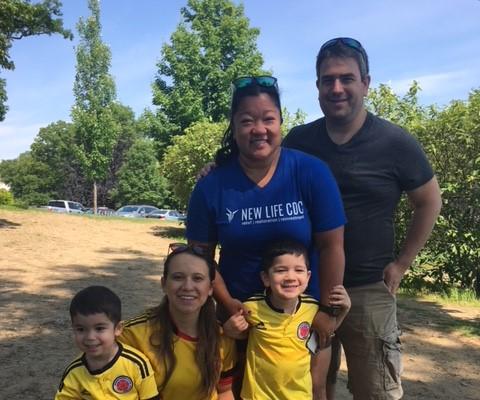 As many of us waited in anticipation to see who would win the exhilarating 2018 World Cup, two Area Directors, Barbara Brown and Birgitte Stoerger from Westchester, New York, wanted to shorten the wait by hosting a “Cultural World Cup” in their own back yard!

With sunny weather and perfect blue skies, the day was filled with laughter and friendly competition as over 100 au pairs, parents, and children came out to Flint Park located in Larchmont, New York. Many of the au pairs and their host families showed up with colorful painted faces, handmade country flags, and patriotic team jerseys to pay homage to their au pair’s home country.

Once attendees had their team colors ready; host parents, children, and au pairs played a few friendly soccer games right there in the park! Aside from the entertaining bumbles and fumbles of the friendly soccer matches, the guests had the chance to relax with an array of snacks and arts and crafts. With the help of their family members, a face-painting booth was set up for the children who wanted to support their team. The children were able to choose between different country-themed paintings and temporary tattoos; talk about fun!

Au pair Alena from the Czech Republican even had this to say about the event,

It was such a great idea to make the meeting into a World Soccer Cup themed event. It was very topical and thoughtful! Seeing as the Cup is an international event, it fits perfectly with the culture exchange aspect of the AuPairCare program.

Like Alena stated, not only did it represent the unification of their countries but it even attracted those who typically don’t enjoy the sport.  NamFon from Thailand stated,

I'm not a big fan but my country loves it. And even though I don’t know much about it I could still talk about the World Soccer Cup with people at the event, learn how to play games, and how to cheer the games from another country. In the end I got to make more friends from this.

At the end of the day, each and every participant enjoyed their time together. Meeting new people and learning about other countries and their respective cultures.  And of course, playing a lively soccer match in anticipation of the World Cup!