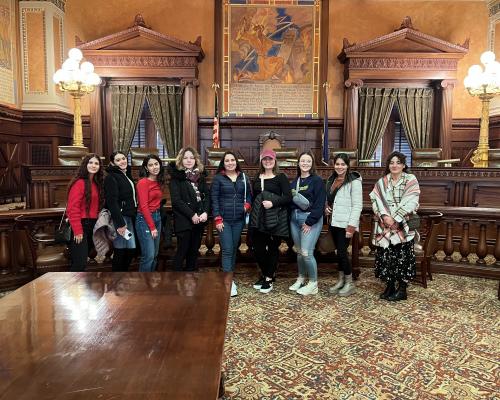 This March, au pairs from the Lancaster, Pennsylvania area embarked on a tour of history and learning to the Pennsylvania seat of government, the State Capitol in Harrisburg! Along with Area Director Jerissa Warfel, the group planned to visit the historical Pennsylvania State Senate Chambers, the Supreme Court Chambers, and the House of Representative Chambers. Along with being an educational trip for the au pairs about state government, it was also a great opportunity to discover more of their host state, Pennsylvania, and step themselves in the history and traditions of the United States!

The au pars first visited the historical Supreme Court Chambers, one of the oldest appellate courts in the entire country. As all Chambers are located within the Pennsylvania State Capitol Building in Harrisburg, which allowed for the group to have a private tour guide! The tour guide answered a variety of civic questions from the au pairs about such as: How do officials become elected? How many women are elected to serve within the Chambers? And what issues are heard in each Chamber?

In addition to the historical and cultural significance of the Capitol, the au pairs were speechless at the grandeur and elegance of the building itself. One of the oldest buildings in the state, which is also known as “a palace of art” because of its grand design, murals, stained glass windows, and sculptures, much of which were crafted right in the state of Pennsylvania! The au pairs also wondered about the amount of real gold used within the building aesthetics, to which our tour guide stated that no one knows because the amount is incomprehensible. The au pairs were astounded by the number of years international artists and architects worked to create what we see today throughout the Capitol. Interestingly enough, this history tour of the Pennsylvania Capitol doubled as an art and architecture learning experience, too!

Once the tour pivoted to the Senate Chambers and the House of Representative Chambers, there were many good questions from the au pairs about the state’s legislative process, which were answered by our tour guide. The au pairs left our tour understanding that the work that happens in the State Capitol to build community takes thousands of people of all different background elected to represent the diversity of those residing in Pennsylvania. The au pairs were also happy to see that several elected officials were displaying Ukrainian flags on their desks to stand in solidarity against the war.

Mariam, an au pair from Georgia enjoyed her time so much that she said, "I want to come back and visit when the gallery is open to the public to watch bills being argued by the PA Senate!" Another au pair, Maria from Colombia, shared, "I can not believe the architecture of this building. I feel like I could look, and look, and look and still find new details."

Overall, the visit truly let au pairs stand in the rooms of Pennsylvanian and American history, creating a unique and moving cultural experience for all that attended.