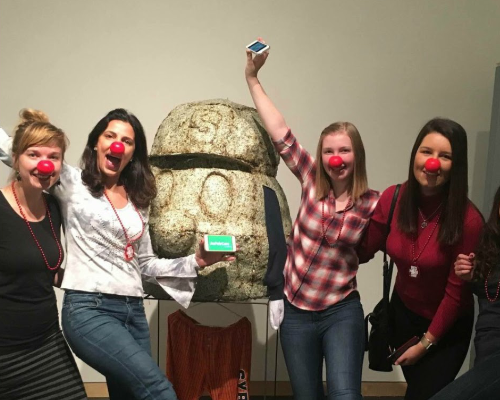 It's amazing how one small act can create so much joy throughout a community. This was the motto for a group of New York Area Au Pairs as they took to the streets of Brooklyn for Red Nose Day. The large group which had origins in Mexico, Poland, and France to name a few, came together for a single goal: spreading laughter, joy and promoting red nose sales and donations to help combat childhood poverty.

Au pair Jaqueline of Mexico had this to say about the afternoon,

'The red noses were my favorite part! We walked many blocks and everybody looked at us like, Wow! they're really having fun. Why do they have that red nose? I think it got the attention of everyone that we were together contributing to a worthy cause.'

Once the group had drummed up enough interest during their 10 block walk, they stopped at the nearest Walgreens which was selling additional Red Noses for donations. Here the girls chanted, shouted and continued to spread the word about Red Nose Day. Not surprisingly, their dedication led them to stay for almost two hours, until they sold every last nose.

'The most exciting part was going back inside Walgreens/Duane Reade and handing the staff all the money we collected for the cause. It was a memorable moment that will hold dear in my heart,' said Area Director, Naomi. In the following days, the group continued to use the red noses and share their story to help inspire others. 'I shared the Red Nose experience with my host family after getting home. I told them all the details about what we did with the silly red noses. We all agreed that was a meaningful way to help other children, and one of the boys even took the red nose that I got for him to school for show and tell the next day! More importantly, inspired by the Red Nose Event, my host children also donated some of their toys and books to those kids who really needed them.'

Overall it was a very exciting day for all the au pairs involved as summed up by Charlotte from Germany, 'I would definitely be part of such an event again! I felt great to be part of the Red nose event, it didn't take a lot from us but we could do a lot for somebody else!'