Au Pairs Go Out to the Ball Game! 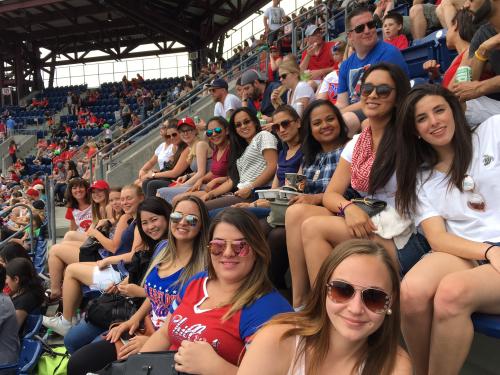 What better way for au pairs to experience American culture than learn about "America's favorite pastime" at a baseball game! Knowing her au pairs were up for an adventure, Pennsylvania Area Director Carolina Pizarro organized a visit to the Citizens Bank Park in Philadelphia. The staidum is the home of the Phillies, the city's Major League Baseball team.

For many au pairs this, was the first time going to a baseball game! The excited au pairs started planning the event months in advance, and Carolina even received last minute calls from au pairs desperately looking for spare tickets. In total, fifty-three AuPairCare au pairs got together to attend the big game: the Philadelphia Phillies against the San Francisco Giants. The au pairs made up a diverse audience, hailing from Colombia, Germany, Brazil, Japan, Mexico, Czech Republic, Spain, and South Africa!

After the opening pitch, the group's excitement began to rise. Although most did not fully understand the rules of the sport, that didn't keep them from celebrating with their fellow fans. The months spent in the U.S. were enough to make them bond not only with the host family, but also their new hometown. The au pairs cheered for the Phillies, as it was their adopted home team, with au pair Veronika from Czech Republic shared: "I bought the Phillie’s’ cap and t-shirt to wear during the game, but now I look forward to wearing them when I’m back home. I will never forget this experience!"

The au pairs soon realized anothe rmuch loved tradition at the ballpark is eating "American" food while enjoying the atmosphere. The au pairs tried fries, ice cream, hot dogs, peanuts in the sheel, and huge sodas (just to keep the souvenir cups). Michelle, one of the au pairs, said: “I'm surprised at the length of the game, but now I totally understand why Americans love watching baseball – there is so much good food!!” Colombian au pair Daniela also shared her experience:

I’m very thankful for the opportunity of watching a baseball game. It was so much fun and a great way to get to know more about the American culture, since baseball is such an important sport here is the US.

At the end of the day, all the au pairs were happy to have a new memory to treasure and talk about when they’ll arrive back home. Let’s hope they enjoyed rooting for the home team!