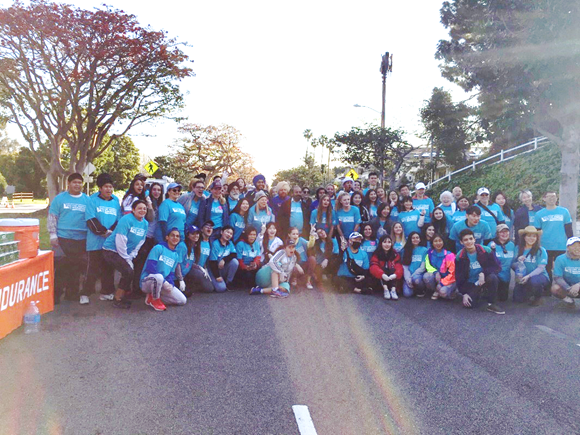 Last month, California au pairs gathered at the LA Marathon to volunteer at a Department of State-sponsored water station. “Cultural Exchange” was the chosen theme for the water station, which was complete with au pairs, local foreign exchange students, and other J1 visa holders.

The day began by filling up cups for the incoming marathon participants and continued as the au pairs served cups of water to the runners. All excitedly cheered on the first round of participants that were in wheelchairs and recumbent bicycles and half an hour later, the stream of runners steadily grew to a large mass. In true LA Fashion, the au pairs were met by runners dressed up as Elvis, Wonder Woman, Captain America, Gumby, and many more creative and entertaining costumes.

Deborah, an au pair from El Salvador, who had arrived the month prior to the event said,

It was a nice experience for meeting new people and helping the community at the same time. After the marathon, I even got to hang out with new friends. Thank you for the opportunity and I'd gladly participate in other volunteering events.

Camila from Brazil is half-way through her second year with her host family. She said,

It was an inspiring day for me to see so many people running for such a long time, especially the wheelchair users. I made new friends from different countries and learned so much about their cultures and countries. We made a great team!

All the au pairs thoroughly enjoyed the event and the opportunity to give back to the community. They made connections with locals and left feeling inspired and excited.