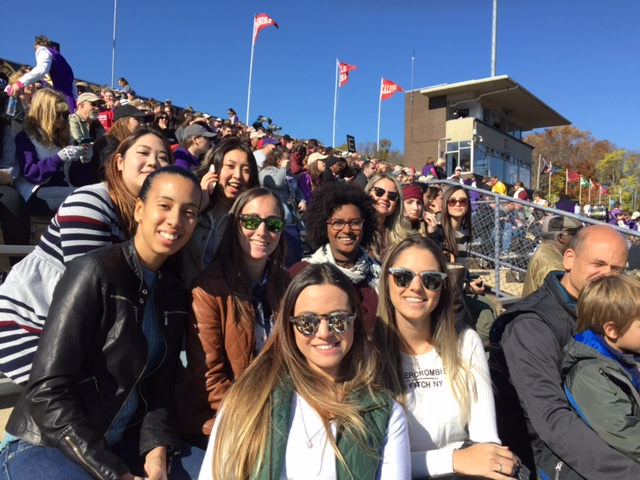 It was a beautiful November afternoon in West Chester, Pennsylvania. Fall was at its peak with the crisp air and the different shades of burnt orange, golden yellow and rich red of the trees. It couldn't have been a better day for au pairs to experience for the first time America's most popular sport: American Football.

On their way into the stadium, the au pairs could feel the anticipation in the atmosphere typical of every football game. Groups of people were tailgating and having fun with friends. Families with kids and grandparents, and alumni of all ages waited together in line. The sky was practically tinted purple and gold (West Chester's University official colors) by all the flags, balloons and jerseys that were spread around the stadium.To make it even better, the University's band delighted the au pairs with music!

Once the game started so did the excitement. It was the first time most of the au pairs had even watched a football game, so the Area Directors explained to them the basic rules of this American pastime. The crowd celebrated every time their team made a significant play, and the au pairs joined them in cheering. They loved to watch the cheerleaders and au pair Veronika from Czech Republic felt the whole experience was 'exactly what you see in movies about the USA!' The University's mascot, the Golden Ram, even gave an au pair from Brazil a hug.

Food played also a role in the event with the au pairs enjoying traditional football fare like burgers, hotdogs, chicken nuggets and Coke. It wouldn't be an American event without them, right?!

The high point of the afternoon came during halftime when the University's band paid tribute to U.S. veterans.It was Military Appreciation Day, so the band played the hymns of the U.S. Army, Navy, Marine Corps, Coast Guard and Air Force. The au pairs were moved to see the veterans stand up when the hymn of their branch sounded and the whole stadium applauded.

Some of the au pairs were surprised that the band played during the entire game. Carolina, an au pair from Brazil, said: 'you would never see this in my country! It is impossible to even think of seeing a band play in a soccer game, so this is really neat to experience.

Janin from Germany said, 'I enjoyed coming to the football game a lot. It was my first time to see a football game and I learned so much about the rules and the American game. It was very interesting to see the ceremony and the marching band.'

Paola, from Colombia, added: 'I loved coming to a football match| it was very interesting to watch and it called my attention the big number of players each team has and that they switch players all the time. We celebrated with the American people every time West Chester scored. It was absolutely new and fun to me! I liked to listen to the band play, they performed amazingly'.

This was a memorable event for all the au pairs and a great opportunity for them to learn and experience part of American culture.