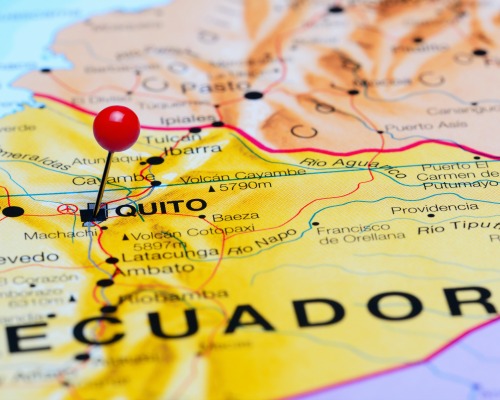 Country Facts: Ecuador's population has nearly 13,032,000 people and has a strong tourism industry as it is home to the famous Galapagos Islands.

Driving: The driving requirements in Ecuador are very much like the ones you would find in the United States. At the age of 16 a provisional license is available; although, most commonly, Ecuadorians wait until age 18 and then pursue a permanent driver's license. All drivers must attend a three-week driving course and past an exam, in practice and theory, before a license is issued. In larger urban areas public transportation and taxis are readily available and very affordable, so be sure to ask your au pair specifically about her driving experience.

English: The English abilities of Ecuadorian citizens vary by region. The further you stray into the surrounding Amazon, the more likely you will encounter people who only speak one of the ten languages, aside from Spanish, that is native to Ecuador. Most Ecuadorians who live in big cities like Quinto are readily exposed to native/fluent English speakers. The basics of then English language are casually introduced during primary school, and English skills are further refined once students begin secondary school. With a rapidly growing tourism industry, much of the younger generation is incentivized to learn English, so much so that you'll find that most Ecuadorian au pairs speak a higher-level of English than you would find in other parts of South America.

Cooking: Almuerzo! or lunch is one of the most important meals of the day in Ecuador. It is not uncommon for the typical Ecuadorian to take an hour or-so lunch and spend it at home with their family.A typical meal is introduced with a zesty soup, followed by a savory dish of rice and meat, and topped off with a plate of leafy greens. A filling lunch, naturally, leads to modest dinner, however, eating this meal again with the family is preferred. Ecuador's all-encompassing landscape provides locals with a collection of exotic fruits such as the Guava, often confused as the Guyaba (American Guava), the Maracuya, and the Pitajaya and traditional delicacies such as cuy unique to Ecuador alone.

Communication Style: Once she's integrated into the family, don't be surprised to be greeted with a kiss on the cheek by your Ecuadorian au pair!Until then, you can expect a warm handshake and to be referred to more formally as Mr. or Mrs. Eye-contact is held in high regard amongst many Ecuadorians as are lots of hugs and less of a need for personal space than is common in the United States. This is a very tight knit culture where friends are often thought of as family!

Highlight: Ecuador is the first nation to recognize the rights of nature into its constitution. Ratified in 2008, this earth conscious nation doesn't treat land as property but rather acknowledges it as a life form meant to be protected!